If we have to describe the place we are now, I would start from the waters that shape the contours of this city. Its river: the Thames. Although in his poem “The Negro Speaks of Rivers” (1920), Langston Hughes was speaking about African and American rivers, every time I look at the Thames, the opening verses of Hughes’s poem come to my mind:

If you want to read the whole poem or hear his beautiful voice, here’s the link:

Sooner or later I will also post some pictures of the Mississippi I took while living in St. Louis, Missouri, and will explore the two rivers through the words by T.S. Eliot. But for now, a summer sunset on the Thames on a grey day like today can be enough. 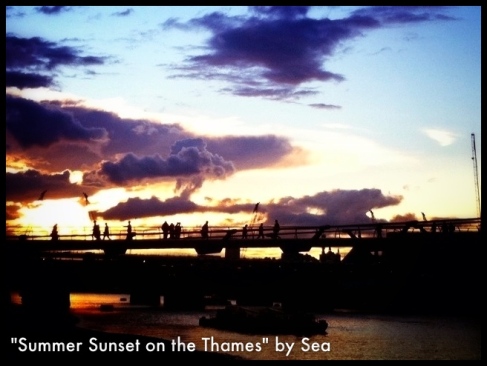 One Flash with the Crowd tries to engage with the idea that the gaze is embodied and can touch lives and actually be touched and changed by the interaction with the ‘objects’ of its gazing. The ‘flash,’ one of the most invasive elements of the camera in its attempt of shedding light on what is dark or only partially illuminated, substitutes the ‘flesh’ in the constant desire of engaging with and backing up from “the ebb and flow” of Life through those fragile fragments of it we call ‘pictures.’

“The crowd is his element, as the air is that of birds and water of fishes. His passion and profession are to become one flesh with the crowd. For the perfect flâneur, for the passionate spectator, it is an immense joy to set up house in the middle of the multitude, amid the ebb and flow of movement, in the midst of the fugitive and the infinite.”